The first investors to label certain publicly traded companies and sectors as “sin stocks” chose that term for a reason: They tended to be religious groups that wanted to invest in vehicles that excluded the types of commerce they considered morally objectionable—often weapons production, gambling, and the sale of alcohol and tobacco.

In the past decade, the popularity of negative screening strategies has ballooned alongside the broader mainstreaming of environmental, social, and governance-focused (that is, ESG) investment strategies. Some of the investors who choose to avoid sin stocks still do so for religious reasons—but plenty more have been vocal about more secular motivations. For example, about a decade ago, fossil-fuel divestment campaigns began to spread across U.S. college campuses and within other institutions in an effort to exert economic, political, and social power in combating climate change.

A premise underlying divestment is that it exerts pressure on, or somehow affects, the companies avoided. But does it?

“If you ask anybody on the proverbial street, they’ll say, ‘Yes, institutions avoid sin stocks, and it hurts those stocks,’” says Shivaram Rajgopal, the Kester and Byrnes Professor of Accounting at Columbia Business School. “That is the accepted wisdom.”

He believes the truth may be more complicated—or, at the very least, poorly understood.

In a new paper, Rajgopal and his co-authors—Robert Eccles, visiting professor at Oxford University, and Jing Xie, assistant professor at Hong Kong Polytechnic University—set out to investigate the veracity of this accepted wisdom.

They found that, at first glance, institutions did appear to hold less equity in excluded industries, especially in alcohol, tobacco, and gas and oil. However, that apparent pattern disappeared when they controlled for differences in key fundamentals between sin and non-sin stocks, including past performance and investment in research and development. In other words, it appeared more likely that these institutions simply held fewer of the types of stocks that had weaker or riskier fundamentals—not fewer of the types of stocks that carried the “sin” label.

Similarly, once the researchers controlled for company fundamentals, they saw no differences in valuation between sin and non-sin stocks. Sin stocks were no more likely to exit the public market, pay more to raise new equity, or suffer in the wake of negative ESG news than the rest of the market. One exception stood out to the researchers, however: Sin stocks did pay more for new debt.

“This idea that somehow the ‘sin’ label, or your line of business, taints you in the stock market is oversold,” says Rajgopal. “We’re not saying the idea that negative screening has an impact is completely invalid—but a lot depends on how you cut the data. The point is, it’s quite nuanced.”

Testing for the Sin-Stock Stigma

The researchers zeroed in on stock valuations and institutional ownership over the 20 years since 2000. For their purposes, they considered sin stocks to be those that have traditionally fit into that category—companies in the alcohol, gaming, and tobacco industries—as well as those that have begun to see the label applied more recently—companies operating in weapons and carbon-intensive industries like coal, gas, and oil.

As they began to analyze the data, it seemed that negative screening had indeed increased between 2010 and 2019; in that decade, the gap between institutional ownership in non-sin and sin stocks was 7.9 percent, compared with just 4.3 percent in the earlier decade. The jump in negative screening appeared to most affect ownership in alcohol and gun stocks.

But then, the researchers took a step that reframed what those gaps appeared to show: They controlled for basic firm fundamentals—including size, return on assets, firm age, capital expenditures, investment in research and development, risk, past performance, stock-price-based dividend yield, and book-to-market ratio. Once they did that, the significance of the “sin” and “non-sin” labels disappeared.

“This simply means that the label by itself doesn’t have any incremental stigma beyond the underlying fundamentals of these stocks,” Rajgopal says. “Regardless of the stigma associated with sin stocks, institutions would probably be expected to hold more of, say, profitable firms, larger firms, firms with better past performance, and so on.”

Once again, when the researchers investigated whether sin stocks appeared to suffer somehow from the stigma of that label, they found that “once you control for what the firms do in a fundamental sense, it’s not obvious there's any difference between the valuation of sin stocks and non-sin stocks,” explains Rajgopal.

The researchers tested for evidence of a sin-stock stigma by looking for several possible signs: lower firm valuations, a higher cost of new equity, higher probability of delisting from the public market, and hits to stock returns following news that could damage investors’ perceptions of ESG performance. They didn’t find indications of any of this. However, they found that the cost of new debt was higher for sin stocks in general—and especially for tobacco, gaming, and fossil-fuel-heavy companies.

Notably, the researchers found another difference that could be attributed to the sin-stock label: engagement levels around ESG issues. The number of ESG proposals (both voted on and passed) in annual meetings was higher for sin stocks than their counterparts, “suggesting that investors in sin stocks likely exert higher pressure on firm management to improve ESG performance,” the researchers said.

Rajgopal says the implications of the paper’s findings are potentially important for big institutional investors who, he believes, are usually genuinely curious about the best ways to align their investments with their values.

“What this basically tells us is that divesting doesn’t really seem to hurt the company,” Rajgopal says. “So, when you’re divesting, it’s worth asking what you’re really trying to do. Maybe the upsides associated with not divesting—engaging the company, using your power to vote, talking to the CEO, etc.—will have slightly more impact than simply getting rid of the stock.” 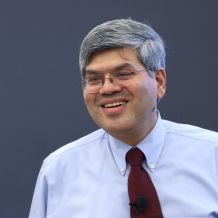